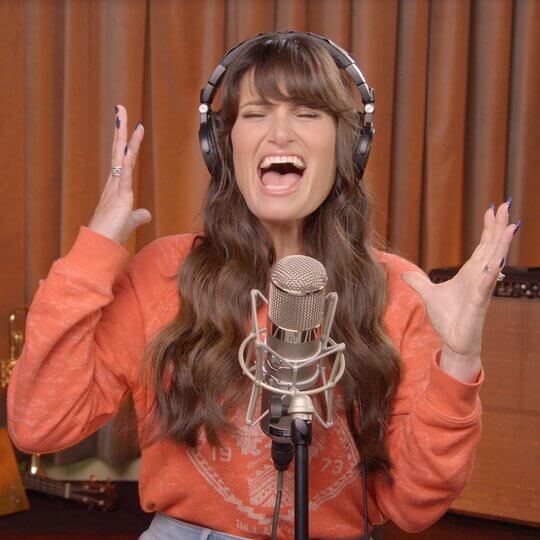 Idina Menzel is an American actress, singer, and songwriter.

“Let It Go” is a song from Disney’s 2013 computer-animated feature film Frozen. Their music and lyrics were composed by husband-and-wife songwriting team Kristen Anderson-Lopez and Robert Lopez.

The song was performed in its original show-tune version in the film by American actress and singer Idina Menzel in her vocal role as Queen Elsa. It was later released as a single, being promoted to adult contemporary radio by Walt Disney Records in January 2014.

The wind is howling like this swirling storm inside
Couldn’t keep it in, heaven knows I tried!

I don’t care
What they’re going to say
Let the storm rage on
The cold never bothered me anyway!

It’s funny how some distance
Makes everything seem small
And the fears that once controlled me
Can’t get to me at all!

It’s time to see what I can do
To test the limits and break through
No right, no wrong, no rules for me I’m free!

Here I stand
And here I’ll stay
Let the storm rage on!

My power flurries through the air into the ground
My soul is spiraling in frozen fractals all around
And one thought crystallizes like an icy blast
I’m never going back
The past is in the past!

Here I stand
In the light of day
Let the storm rage on
The cold never bothered me anyway!

Hope you enjoyed this post? Share the vibes with your friends on all your social media handles 👍 || Don't leave without giving me feedback. Let's start a conversation in the comment section below 😉

Will you support my best feelings today? Use the button below or the coffee cup to by us a book.

Be part of our Telegram Group, Facebook group (For Daily Prayer Topics), and follow us on Instagram. All for the Gospel - Bringing the Gospel to your doorstep, even to the marketplace!

Buy Me a Coffee